Anund and his brother Heden.  Heden died.  Their father, Folkvid, prominent in Badelunde, erected the stones and mound for Heden.  Vred carved the runes.  Folkvid must have been a formidable figure. This Viking burial mound, dating between 600-1000 AD, erected in Heden's honor (then why is it called Anundshog?), consists of five different sets of standing stones in the outline shapes of Viking ships (no real ships are here) is huge.  It is the largest in Sweden. See http://www.werbeka.com/vasteras/anunde.htm/  In some other places, an entire ship was buried with the person inside, but not here, apparently. These are still called "stone ships."  The area has been inhabited since about 500 BC. 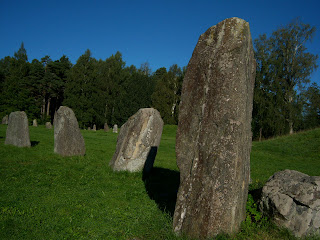 Anundshog Viking Burial area, stone ships, Vasteras, Sweden
Get here early in the morning, before the gift shop opens and the buses arrive. No entry fee. Get the shadows long from the standing stones, no other people in your pictures. 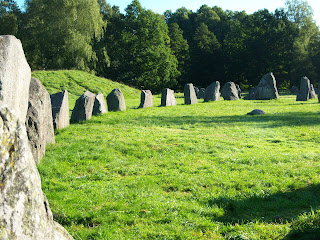 Some runes are barely visible now.  For runes, see these letter-word shapes (different cultures had different forms, from the  Saxon, to various Norse, to Anglo-Saxon) at http://www.sunnyway.com/runes/runestones.html/  They apparently started as wood, used for divination - foretelling - and healing - and moved to use including stone commemorations, telling stories, putting one's stamp on life.

Your name may even be runic -- capable of an interpretation through runes,  See runes for W-i-d-ing at an earlier post here, in runes. All is speculative, of course, but we found an old family tale represented in the runes themselves, using a set of runes. Story stone marks. 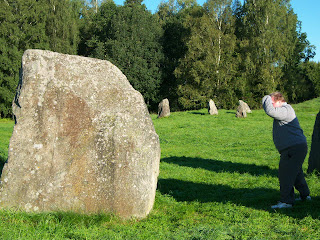 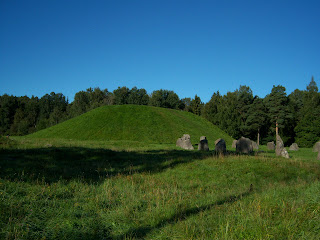 Heden's Viking Burial Mound, Anundshog, Vasteras, Sweden
Still, why is this called Anundshog if nothing is for Anund? Need to research.
The mound is 36-45 feet high. Go ahead. Scramble up. 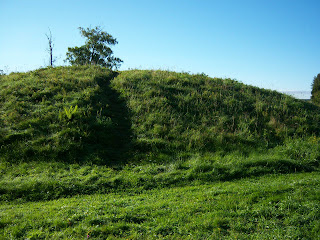 Tumulus, a secondary one, Anundshog, Vasteras, Sweden
The fjord used to be extend all the way to the burial mound area, with room for a broad road between. Prominent location.  The road was used for each new king to travel on their rounds receiving tribute. 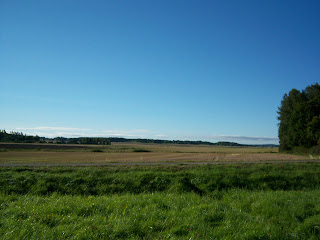 We forget information, so take a photo of explanations:  fair use of bits and pieces -- here is information on burial procedures. Cremation, then a cairn, then the "tumulus." 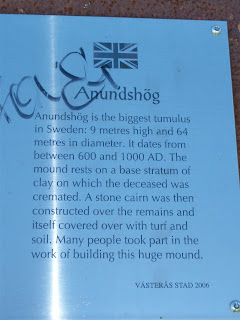 Burial procedures, Anundshog, Vasteras Viking mound, Sweden
Cremate the person on a clay base, then build a stone cairn over top, and cover that with soil and turf. There is the tumulus.
Here is the Folkvid stone: 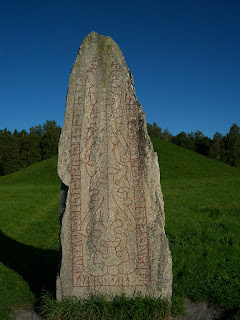 The Folkvid Stone, runes by Vred, named as the Rune-carver. Anundshog Viking Burial area, Vasteras, Sweden
The Folkvid Stone is part of a line of stones in a cluster marking the road, not a stone ship.
The forms are filled in with color to make them more legible.  Pictograms, and letter-word forms. "Folkvid raised all these stones for his son Heden, brother of Anund.  Vred carved the runes."   Naming the craftsman who carved the runes: did Vred add that himself? To tout himself for well deserved accolades for good work, or did Folkvid himself direct that Vred be paid tribute in this way. 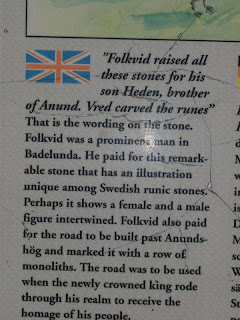 Folkvid, father of Heden, raised these stones for Heden, and Heden was the brother of Anund.
Does that make Folkvid the father of Anund? Or were Anund and Heden half-brothers? 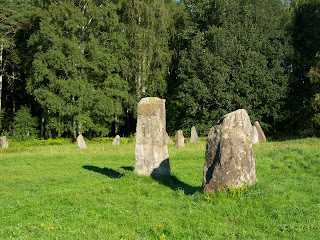 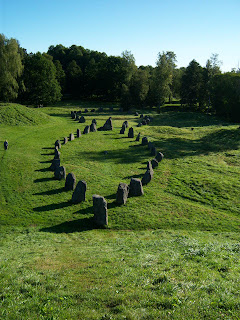 Location location.  Vasteras was founded  as Vastra Aros on the River Svartan some thousand years ago; it was the second largest town in the 1100's, and became a religious center in the 12th Century, and a cathedral started. Most of us are not familiar with the wars among the Northern people, but in the 14th Century, the city became a stronghold, but in 1520 was captured by the Danes nonetheless -- and liberated back again by the Swedes the next year.

The river -- what became of that?  Shifted over time and became Lake Malaren, or is the River still separate?  Quick, find a map.

Yes.  It looks like rivers and fjords shifted, and there is a large lake-fjordish system going on.  That makes sense, because we were told that the Viking burial mound here, at Anundshog, used to be on the fjord, with waterway access all the way to Stockholm.

1527:  a very big year.  The Reformation here. Catholicism was banned. And, over the next centuries, mining and other industries grew.

For the Green among us, the city buses (so it says here at http://www.vasteras.se/languages/english/Sidor/englishwelcometovasteras.aspx) are fueled by their own bio-gas.
Posted by Carol Widing at 11:48 AM